Another story about MUNI and the lack of common decency displayed by its riders.

This morning I found a nice place to stand in front of the single seats. These are coveted spots since standing there does not obstruct other riders from walking by. Also, when the seated passenger leaves, you get a single seat to yourself.

My assumption was full of fail. She leans down towards her friend and speaks in a louder conversational voice. Conveniently for her, the backpack she is wearing pushes me out of the space which leaves me standing in the middle of the walkway with no handholds.
____
| 2 |
me

This recounting has been brought to you by the letter D.

Lots of things get outdated and lose their place in this world. It’s a sad day when those things are comics. Looking through my links, a number of web comics are no longer available.

The Mochi (themochi.com) has become just another WordPress blog.

(I was wrong about this one; the site was just down at the time. Comic is still ongoing.)

Even Dilbert (unitedmedia.com/comics/dilbert/) is no longer available.

Here is a picture of a sad panda to represent my current mood: 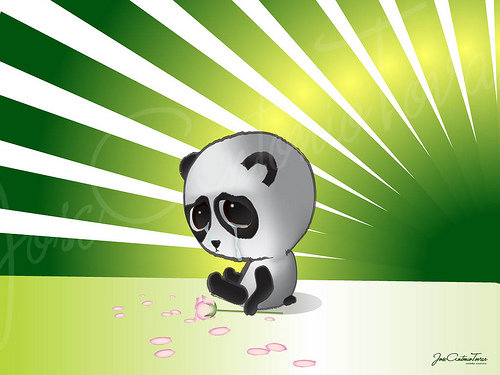 Image Disclaimer: The signature and watermark is hard to discern. I am reading it as “Joe C T”. Fine work there, Joe.

Webhosting.info updates a csv file that matches IPs to countries and offers it to the public free of charge. The latest csv file has over 96k records.

Here is how to load the csv into the database on your webhost for those who do not have unix access:

I had set up a site nice and proper with an CM admin subdirectory. Added the requisite mod rewrites to make the URLs pretty. But, for some some reason, it broke all the forms in the admin subdirectory that used POST as its method. The forms would redirect to the 404 page.

The solution to this problem after much searching was to add Option +FollowSymLinks to the head of the .htaccess file. Everything worked perfectly afterwords.

Can you believe it? My stream of consciousness practice has ended after one day. The second day, I was sitting at the computer and drew a complete blank. I blinked and 10 minutes had passed on by. I am probably not cut out to be a writer; although it was an interesting path when I was younger.

I am going back to what I am best at which is building random websites for kicks and giggles.
END_OF_DOCUMENT_TOKEN_TO_BE_REPLACED

Watched the news last night and a video story came up of Texas’ Governor Perry saying their state should secede from the United States. Really?

Sure, talking about secession isn’t a new thing. There was talk in California about becoming its own country when the state had a larger GDP than many independent nations. But, all it was just talk. It never came out of the mouths of the states’ leadership.

But, let’s just run with it. What would it mean for Texas to become its own country?

They will no longer be subject to the laws and regulations of the United States.
They can set their own rules and policies for immigration.
They can create their own constitution to fit their ideals.

That sounds pretty sweet, but what would Texas lose by becoming its own country?

They will no longer have the protection of the United States military.
Texans living abroad (outside Texas) will have to apply for a working visa or be deported.
They will have to decide on the type of political system to use–Total Capitalism, Democracy, Dictatorship?
Their leader will be Governor Perry.

Cons seem to outweigh the Pros there.

I read somewhere that if you don’t use it, you’ll lose it. It being the ability to write. Researching on this subject, one solution to keep the ability sharp was to write for a set time limit every day. So that is what I am going to do. I am going to start at a set time and write for 10 minutes straight on whatever I can to fill the full 10 minutes.
END_OF_DOCUMENT_TOKEN_TO_BE_REPLACED

The hearing to discuss [CA Bill 178] has been moved to April 27th (2nd or 3rd delay). We have heard anecdotally that the committee was surprised at the opposition to this bill. Beth Kirsch and Brad Waller are coordinating district visits, and are looking for participants. If interested, email: district_visits@performancemarketingalliance.com. Karen Garcia, and Brook Schaaf are considering another possible visit to Sacramento. If interested, email: lobby_day@performancemarketingalliance.com. Beth, Brad, Karen and Brook are also organizing editorial visits with mainstream press.

I was reading the backlog of news the other day and I stumbled on a surprisingly short-sighted bill which is equivalent to the Warriors signing Maggette in a panic move after Baron skipped town.

CA Bill 178 is authored by Assembly Members Nancy Skinner (D) and Charles Calderon (D). The bill adds this paragraph into the Revenue and Taxation Code:

(5) Any retailer entering into an agreement with a resident of this state under which the resident, for a commission or other consideration, directly or indirectly refers potential customers of tangible personal property, whether by a link or an Internet Web site or otherwise, to the retailer, if the cumulative gross receipts or sales price from sales by the retailer to customers in this state who are referred pursuant to these agreements is in excess of ten thousand dollars ($10,000) during the preceding four calendar quarterly periods. This paragraph shall not apply if the retailer can demonstrate that the resident with whom the retailer has an agreement did not engage in referrals in the state on behalf of the retailer that would satisfy the requirements of the commerce clause of the United States Constitution during the four quarterly periods in question.

After a quick skim, it looks like the state wants to apply sales tax to transactions made between online retailers and the local populace on the condition that the retailer has made more than $10,000 in sales in California in the past year. These retailers currently do not charge sales taxes in California because they do not have a physical presence in the state. That sounds reasonable, right? They do business here, we tax them. It’s the American way.

But, if you were to read the bill more carefully, you would see a major blunder on the part of Assembly members Skinner and Calderon. There is a loophole in the text which allows retailers to sell to California tax-free and those that get burned again are the residents of California.
END_OF_DOCUMENT_TOKEN_TO_BE_REPLACED

Usually, I don’t talk about sports on this blog, but watching the Warriors always makes me mad for some reason. It takes a special kind of person to be a fan of the Warriors. Someone who can stomach bad basketball, horrid coaching and an even worse front office.

The season is basically over for the Warriors. They are down by 20 going into the 4th against the Phoenix Suns. Nellie and Jackson has been ejected. So, naturally, the stand-in coach Keith Smart, should put in the rookies to give them some burn. Does that happen? No!

Who does he roll out there but Ellis, Crawford, Azubuike, Maggette and Turiaf. What the hell is he trying to do? Are they going to play team-ball and try to give the gung-ho effort of coming back to win a meaningless game? If you’ve seen these players play, besides Turiaf, team-play is not in their vocabulary. So, rather then giving twelve minutes of experience to the lotto picks on the bench, we get to watch a bunch of veterans with no upside hoist up shots in a game with no meaning.

Great job, guys. Thanks for turning the clock back and reminding us of the previous decade of suck we’ve already lived through.